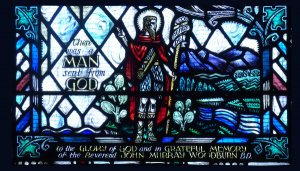 Beith Parish Church building was built on its present site 343ft above sea level at a cost of £2455. Building began in March 1807 with a ceremony of laying the foundation stone and incurred expenses for hospitality of £10 18/- and music £12 12/-.

The baptismal font was presented to the church in 1896 and is made of marble and onyx. The baptismal basin is inscribed ‘Parish Kirk of Beith 1853’

The church bell was gifted in 1823 by Robert Shedden of London and a native of Beith. It not only strikes the hours and ringing the church services but also the last 5 minutes of the year.

In 1994 James Quinn planned and presented a method of operating the bell electrically when it is rung for services and other events.

Christianity and Churches in Beith

Early Church Christian teaching is reputed to have been brought to Beith around 850AD by St Inan but there is uncertainty about whether Inan actually existed though there is a tradition of preaching from St Inan’s Chair on Cuff Hill beside the Bigholm road to the north-east.  St Inan also appears on the Beith flag. There are records of a St Inan being recognised in 839AD with a feast day in August.  This became established as a local fair, moving from the countryside into the town itself.  Christianity may have reached Beith either from Iona via the Celtic (Culdee) tradition or the Roman tradition coming from the south (see feature in Issue 1, May 2007, of the Bellman newsletter of Beith Cultural and Heritage Society).  By the 10th century, the latter prevailed in the British Isles.  The medieval period saw cathedrals and abbeys (as at Kilwinning) established together with churches and chapels for local populations.  Kilwinning Abbey gained lands in and around Beith, having a ‘grange’ (farm) on the Bigholm road.  Early rural churches in Scotland were almost always small and often built of timber.   The abbey may have created the first church on the site now occupied by ‘The Auld Kirk’ at Beith Cross  There is evidence that some local people may have preferred a church further to the east since, until the late 18th century, most people lived in the rural parts of the parish mainly east of the present town. The original Beith parish extended some distance into Renfrewshire (including the Lochwinnoch area) and, in the 1890s, a further small area in Renfrewshire was transferred out of Beith parish as part of arrangements for a new parish church for Caldwell/Uplawmoor.  Abbeys were dissolved as part of the Scottish Reformation.

Reformation The more austere Presbyterian Church of Scotland was the key force after the Scottish Reformation of 1560 with a new emphasis on a simple form of service. The Church still had bishops for most of the 17th century but new (or altered) churches had minimal decoration and very restricted music. Stress was put on the preaching of the Word, Sabbath observance and the expansion of education to allow people to read the Bible (soon available in the authorised King James version of 1611).   The earlier parish church was replaced on the same site by ‘The Auld Kirk’at the Cross around 1593 with the kirkyard remaining the local burial ground.

Divisions After lengthy debate and a rising town population, this parish church was eventually enlarged in 1754.  This was a time of growing controversy about the role of landowners in maintaining the church and choosing ministers.  Multiple divisions emerged within the Reformed Church of Scotland.  In Beith, the first breakaway from the Church of Scotland was in 1761 when a Seceders (anti-burgher) group was formed with a building in New St.  This group moved in 1816 to Mitchell St with the church there later altered to its present form.  It became part of the United Free Church in 1900 and has been Our Lady’s Roman Catholic Church since 1922.

In 1784, there was a second Secession from the Church of Scotland, forming the Relief church which in Beith erected the building still surviving as the Scout Hall in Head St.  After another major split in the Church of Scotland in the Disruption of 1843, the Free Church of Scotland was formed.  Members in Beith acted quickly to build a church in New St opening on 31 March 1844. This congregation moved in1883 to the new Hamilfield church built at the junction of Roebank Rd and Bigholm Rd.   In 1900, the three ‘free’ churches in Beith – in Head St, Mitchell St and at Hamilfield  – became part of the United Free Church but separate buildings and ministers were retained.

Unlike the Church of Scotland the ‘Free’ churches did not enjoy the benefits of legal requirements for larger landowners (heritors) and farmers to contribute the main part of Church of Scotland funding.  Part of the costs to landowners were met through a right for heritors to determine and receive the ‘seat rents’ paid annually by church members.  Landowners, farmers, lawyers and bankers tended to be members of the ‘established’ parish church as well as a good number of townsfolk.  In contrast, the Free churches were fully dependent on direct contributions from members.

The Parish Church moved to the much larger new church at the top of the town in 1810.   Hit by a severe storm in 1884, the Parish Church was renovated and enlarged to seat 1,254 in 1885.  This was the first time that the congregation had been asked to provide the funds required for extension and improvement.  The Heritors still financed the major repairs required after the storm.  The enhancements included the installation of an imposing pipe organ and the creation of a choir and choirmaster using a wider range of music.  Also at the Parish Church, an adjacent Church Hall opened in 1899 with further extension in 1962 and internal rearrangement in the mid 1990s.  By 1930, all contributions from heritors had been abolished while the value of Church of Scotland endowments is now much lower than they were in 1950.  Contributions from legacies are also much lower than in former years.

From Three to One   Following a disastrous fire in the Hamilfield Church in 1916, agreement was reached in November 1917 on a merger of the three UF churches with interim worship in the Head St church pending longer-term decisions.  Hamilfield was chosen as the preferred site for a single, but enlarged, church building and linked hall.  Action was delayed by the First World War but the extended church seating 800 and also having linked hall space opened on 26 January 1926.

From 1861, there was also an EU Congregational Fellowship in Beith but the church in Kings Road did not open until 20 November, 1864. This church continued, with various name changes, until the building was sold in 2011 (it is now a pre-school nursery).  Some members of the church continue to meet in Beith Community Centre (see Beith UR Church, Quenticentennial 1861-2011 booklet)

The Roman Catholic Church   After the Scottish Reformation in 1560, very few remained Catholic apart from some parts of the Highlands and some Catholic landowning families (including the Marquis of Bute).  Catholics also suffered other legal penalties but their number began to rise sharply from the early 19th century as more Irish emigrated to the west of Scotland and further afieId.  One area of attraction was mining and the new ironworks established at Kilwinning, Dalry and Glengarnock.  Mostly, the Irish ended up in labouring and other lower-paid work but these were better than deteriorating conditions in Ireland.  Dalry gained a resident Priest in 1846, followed by Kilbirnie in 1858 with church buildings also available by 1851 and 1862.

With a lower Catholic population, Beith’s Catholic chapel (Our Lady’s) did not open until 1922.

Most unusually, this building was the former Mitchell St UF Church.  Given the religious tensions of the period, there was no direct sale but a resale by the original buyer of the Mitchell St building.

In more recent times, there has been no resident priest in Beith.

Reunion In 1929, the United Free Church of Scotland reunited with the Church of Scotland.  The local consequence was that the former UF church became a Parish Church (serving the northern part of the former Beith parish) under the name Trinity while Beith Parish Church became Beith High covering  the southern part of the parish.  In reality, both churches had members from both parts of the parish.  Both also have a long history of involvement in community activity, including poor relief and the extension of education in the 19th century and the more recent establishment of the joint Beith Christian Action Group with its well-established Thrift Shop.  After 15 years of linkage and over 50 years of shared activities (such as summer services), the two parish churches merged as Beith Parish Church on 30 June 2011.   Part of the Auld Kirk at the Cross still survives but, though buildings hold many memories, the essence of Christianity then and now is not about structures but about